We're not dead yet. 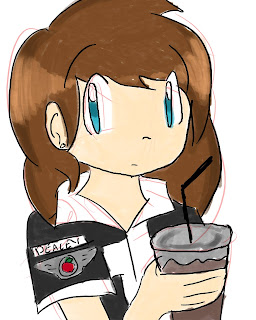 Posted by Emily Imes at 6:31 PM No comments:

Email ThisBlogThis!Share to TwitterShare to FacebookShare to Pinterest
Labels: updates

The White Rose of Fiorazzurro: Chapter 27

The White Rose of Fiorazzurro: Chapter 26

The White Rose of Fiorazzurro
Chapter 26 (or, “Raid on the Crystal Palace”)

The White Rose of Fiorazzurro: Chapter 25

The White Rose of Fiorazzurro
Chapter 25 (or, "The Final Battle Begins")

The White Rose of Fiorazzurro: Chapter 24

The White Rose of Fiorazzurro
Chapter 24 (or, "Oracles and Corracles")

WHERE WE LAST LEFT OFF:
Calimero Pineiro has been chosen as savior of not only his small island home of Fiorazzurro, but his entire universe. He's been chosen by Rifka Moscavitz, member of QWERTY, an organization that deals with string theory. Normally an island of magic and lore ruled by faeries, Fiorazzurro has been ruled by the anti-magic Queen Cendrillon for the past five years. Princess Daisy of the faeries has started a revolution to get her home back, and Calimero and Rifka have joined with her. But nothing has gone to plan -- and Calimero's about to finish the potion that, once given to Daisy, could change everything.

Greetings From Limbo!: The Art of Hiding Away

It's always interesting to be away from a project from a while. Usually, with me, when this happens, it means I'm never going to pick it up again -- or it'll be ten years or so before I revisit it. It usually happens because I've lost interest in a story, or I've found something else to do.

In all reality, you could paint the reason for Dvorak not continuing on as about half of that. I had book 3 planned out through November, so NaNoWriMo wouldn't get in the way -- and then planning for Comic-Con nearly ate everything, which is why, after my backlog ran out, the story didn't continue. I was in the midst of pounding out words for my NaNo novel, which lost steam two-thirds of the way in.

I hated writing for about a month and a half back there. I needed to redefine it in terms that worked for me. And I didn't want to write Dvorak during that period. Not even so much that I didn't want to, but I couldn't even if I tried.

The big reason for Dvorak being spontaneously swept into hiatus would be a very small critter called the bedbug. We caught them super-early -- the same week as Comic-Con. I spent more time than I ever wish to again at the laundromat, so if you visited us, we did not spread! (My assistant stayed on our couch the entire week and hasn't gotten them.) A good portion of my stuff is still in plastic bags, and a bunch of things got lost in the shuffle -- including the flash drive I used to transfer files in the days, weeks, and months before Comic-Con. Not all of the sourcefiles from Dvorak are missing -- far from it -- but everything's like a tornado hit it. This is also why the Conventional Adventures drop off a cliff; I need to sit down and see if I can regather all of the suggestions from the last two days of the con, which are, for the most part, safe...if scattered.

I don't want to run away from the series anymore. I feel as if my characters deserve more than that, and you, my readers who have stuck with me, deserve more than that. I'm sorry that I've kept you hanging, but sorries aren't good without anything to back them up. Nothing's going to change overnight. I'm not magically going to have the end of Fiorazzurro for you tomorrow, or a publication date, or anything like that. I'm only human. I can't bend the laws of space with the bite of an apple. All I can do is thanks to you, the fans; all I do is because of you.

In the meantime, here's what I can fill you in on:

1: CAIG will be finished when I find the stuff for it. That might take a while. But it will get done. I'll be at Genericon in March, and while at the con, I will solicit ideas for a new Conventional Adventure. My goal, then, is to have NYCC's adventure done by the time I set food at RPI.

2: Fiorazzurro will be hopefully completed in that same timeline, although I can't make any guarantees for that.

3: Last year, my plan for the series was to publish two books a year. It's not that I think that is undoable; rather, I need to take myself at a better pace so I don't burn out. Fiorazzurro will be published this year, as well as seeing book 4 in serial form. Don't bet on seeing book 4 printed by the time we reach NYCC, though. Will this mean it will take longer for Dvorak to play out? Most certainly. But I'm okay with that ride.